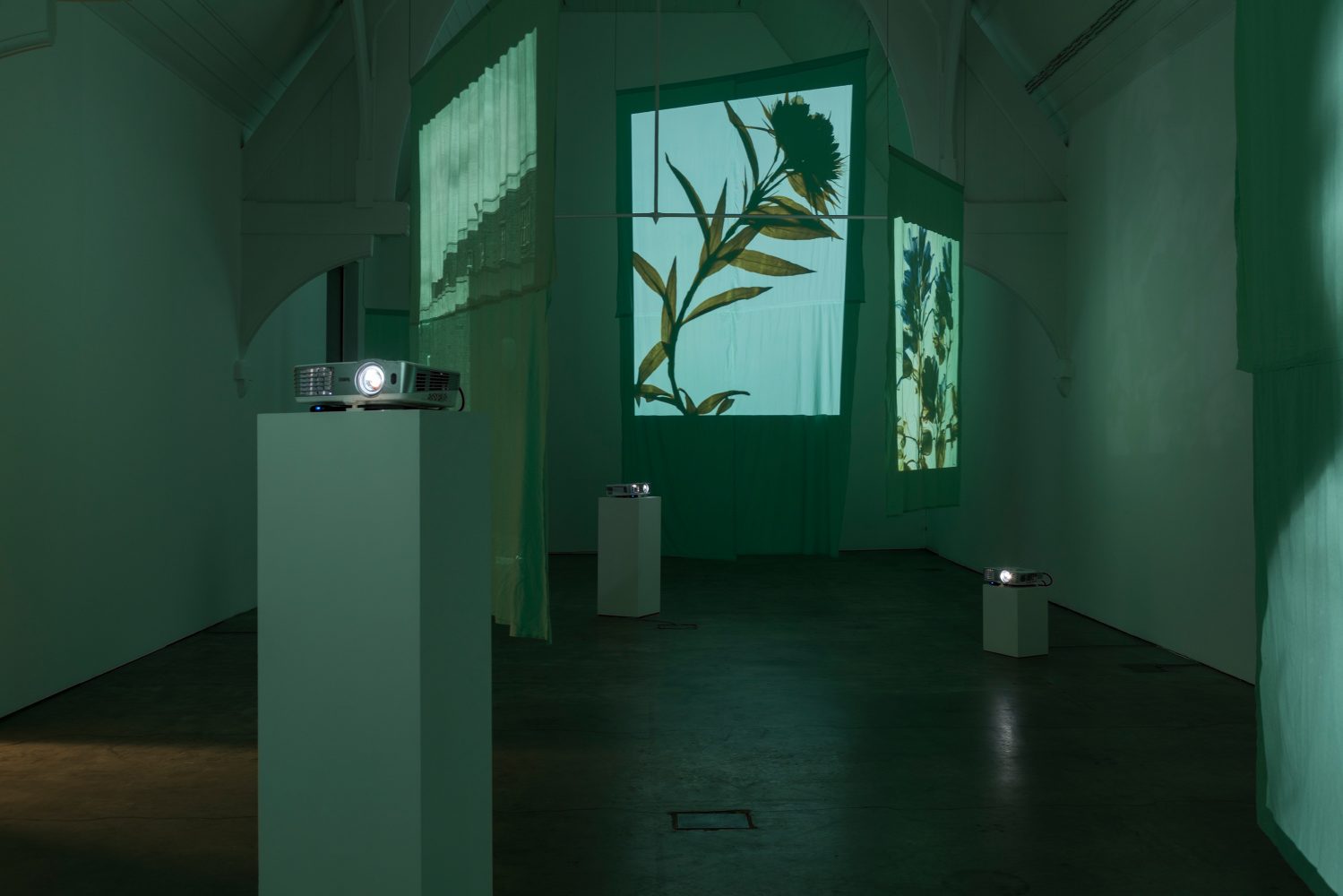 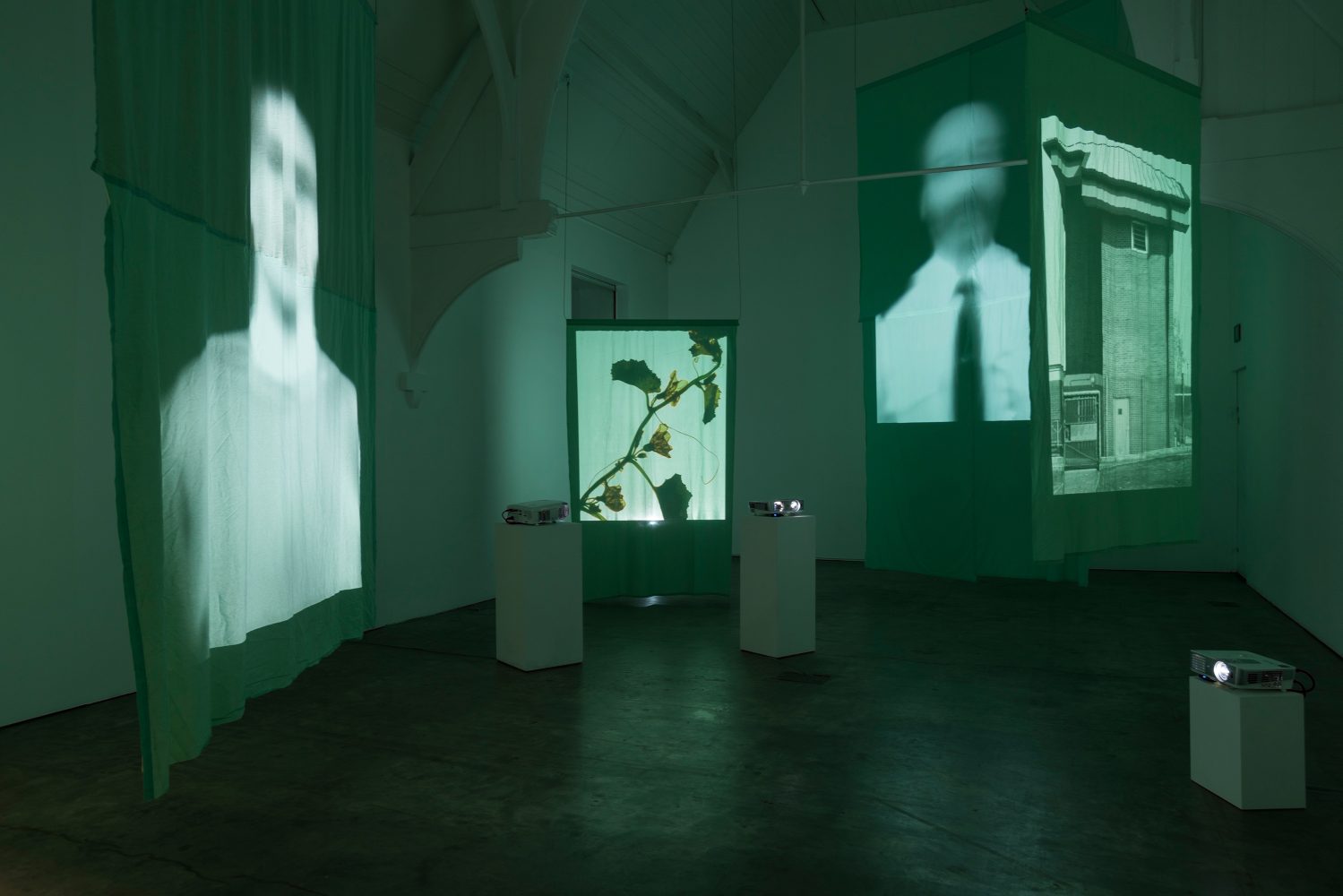 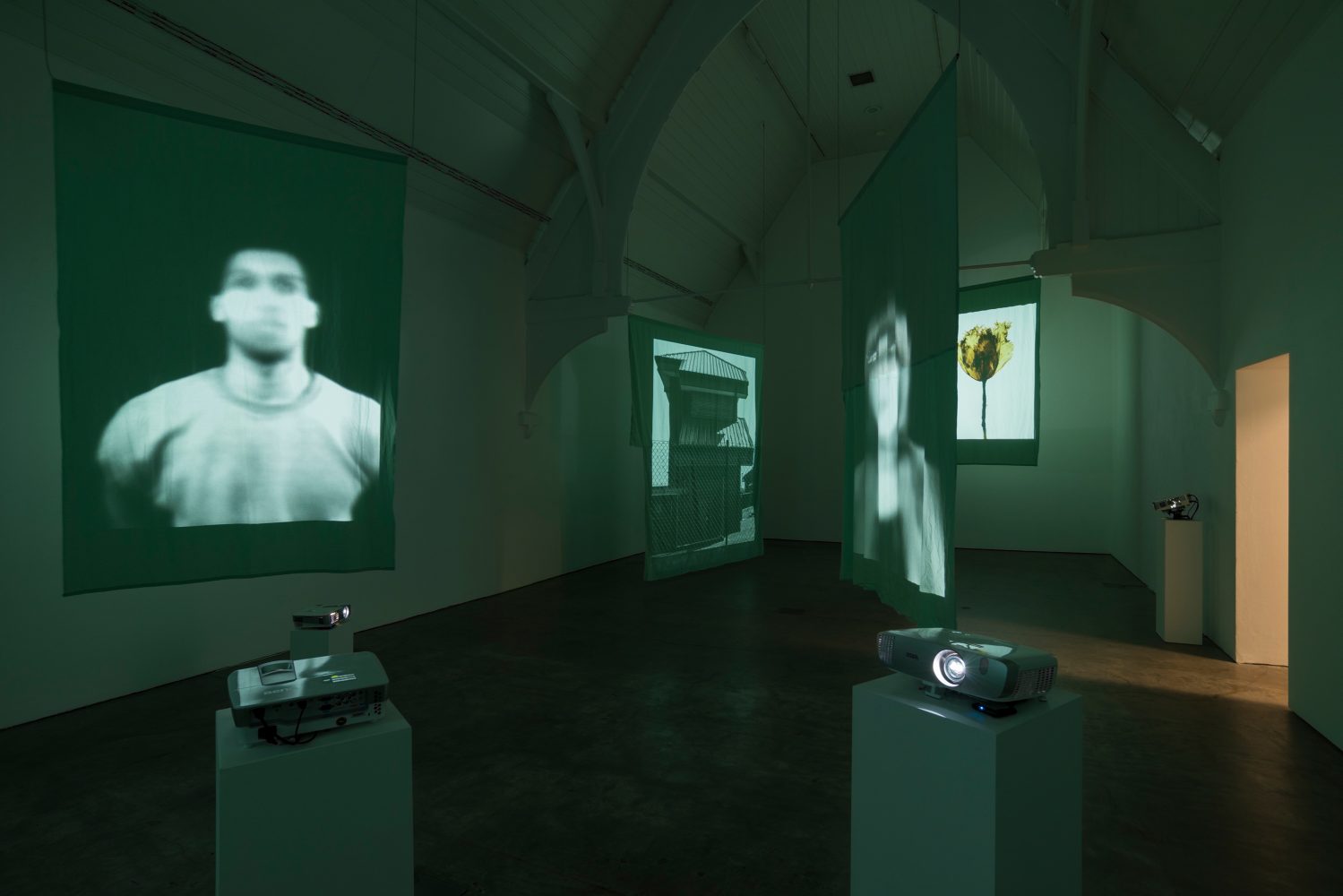 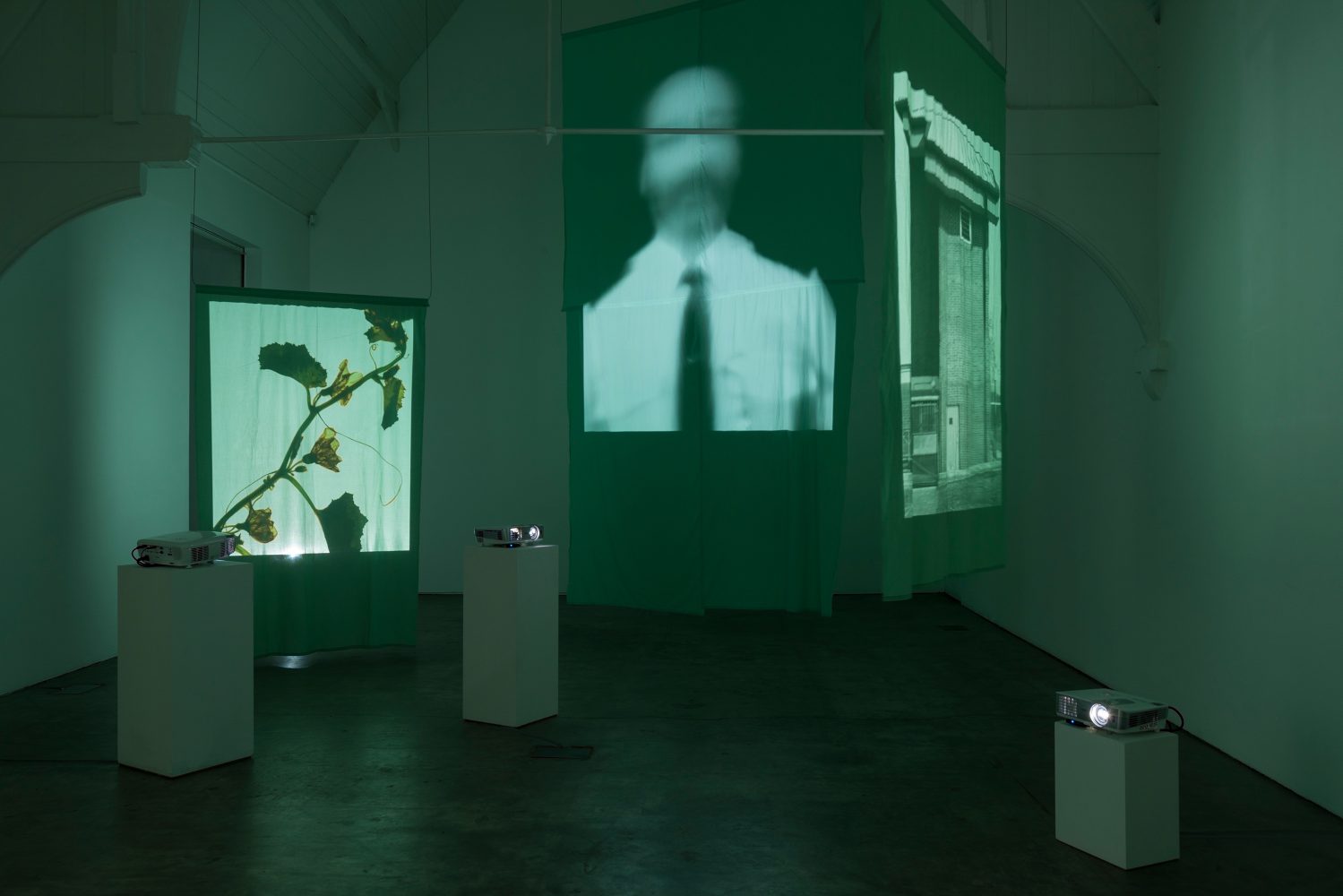 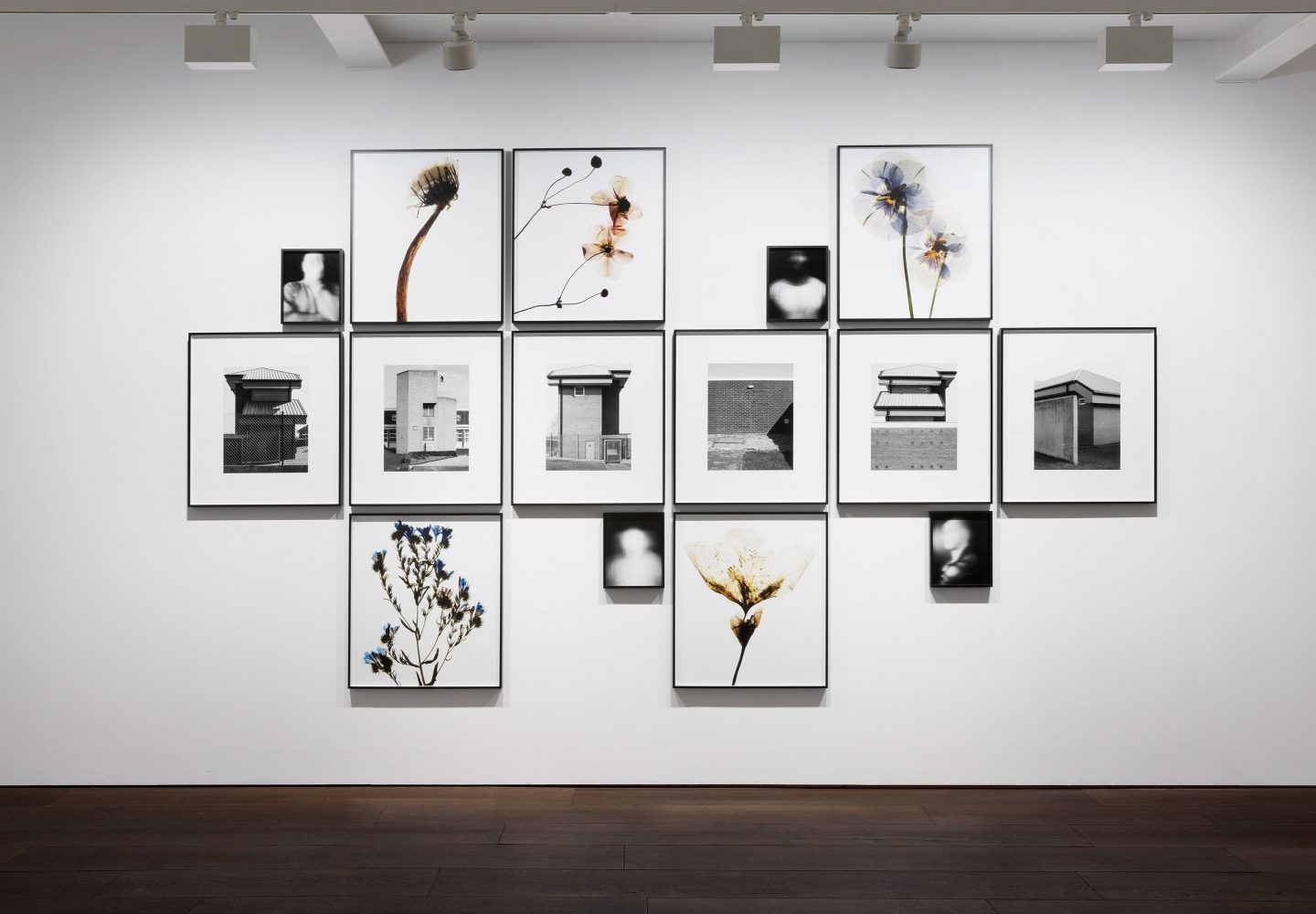 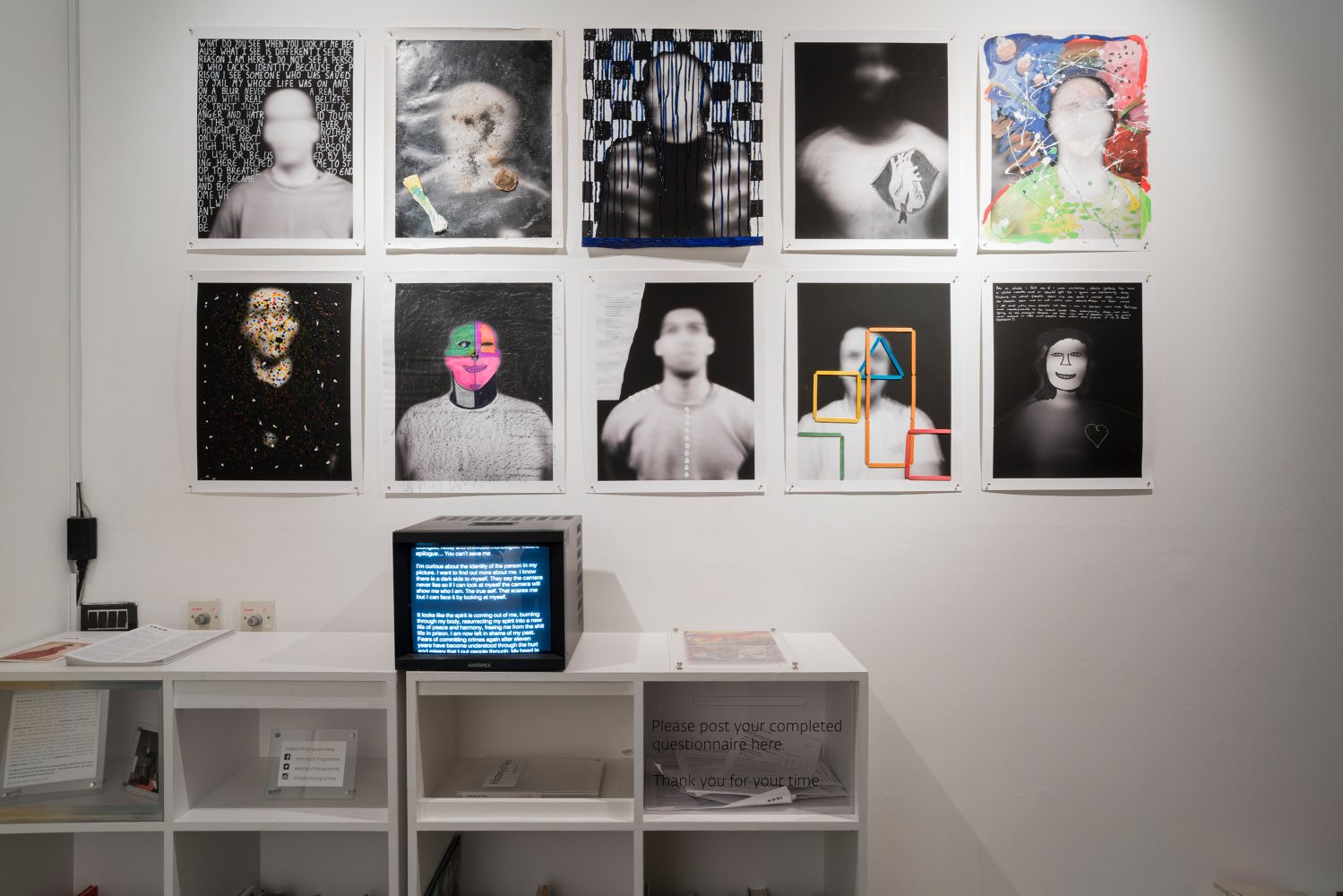 My Shadow’s Reflection (2017) is a five projector installation and a series of prints of three types of photographs: architectural images from around the HMP Grendon; photographs of plant matter that Clark picked inside the prison and pressed; images of the HMP Grendon inmates and staff made with a pinhole camera. The pinhole images are made in a group situation where men take it in turn to stand before the camera and talk in response to questions from me and other men in the room about why they are at Grendon, their past lives and their experiences of prison. Each exposure takes about six minutes. Prison Officers and members of the therapeutic staff also take part in making images of themselves. The men then respond to the image of themselves in terms of what they think it says about them, what others may think of the image and if it represents in any way aspects of the experience or process of therapy at Grendon. The images are projected onto and through green bed sheets the men sleep between locked behind a door during what is described as ‘hard lock up’. The night time of reflection on talking and hearing about the damage you did to someone and of what was done to you; of seeing those images of yourself. Of hearing what those you live with and have to tolerate did to others; of what they have exposed to you of their episodes of violence, abuse and neglect. Prison officers and staff talk, in turn, about their images in relation to the experience of working in Grendon. The men’s words and images, together with the plant and architecture photographs also comprise a standalone artist’s book with the same title. The design of this is a reflection of itself with the layout and placement of each page and type of image the same in each half. Copies of this have been given to the men and staff who took part and sent to decision makers and opinion formers involved in criminal justice, and made available for purchase.

My Shadow’s Reflection was produced for In Place of Hate, an exhibition of work made by Edmund Clark over three years as artist in residence in HMP Grendon, Europe’s only wholly therapeutic prison, specialising in the rehabilitation of violent and sexually violent offenders. Men apply to be sent to Grendon from within mainstream prisons to undergo an intense process of group therapy and self-revelation. Living in communities of about 35 they share and attempt to understand their criminal narratives and personal histories, often of abuse, addiction and disorder. They have roles of responsibility in the community and must hold each other’s behaviour to account every waking hour when they are out of their cells. This work has been shaped by the men, staff and the intense therapeutic processes and experiences at Grendon; and by the environment of the prison. It explores notions of visibility, transformation, trauma and self-image in the context the reductive binary of good and evil that characterises discourse about criminal justice.